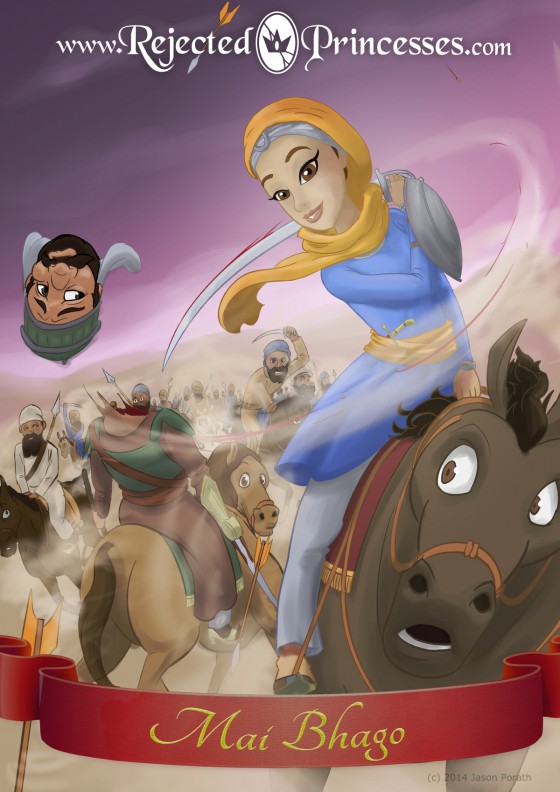 Introducing the eleventh Rejected Princess: Mai Bhago, 18th century Sikh warrior-saint and only survivor of the Battle of Khidrana.

A quick bit of background, since it may be that you, like me, do not know a ton about Sikhs. You probably know that they’re the guys who wear turbans, don’t shave, and consistently get mistaken for Muslim — usually by ignorant morons who are trying to start something. Frustrating as that is, douchebags attacking them for virtually no reason is something that Sikhs have had to live with for the majority of the religion’s existence. Exhibit A: the Mughal Empire.

The Mughals were badasses. Their founder, Babar, had quite the lineage to begin with: descendant of Tamerlane (an Uzbeki warlord known for constructing pyramids out of his enemies’ skulls) on his father’s side and grandson of Genghis Khan on his mother’s. The Mughals continued and refined this legacy. On the one hand they did so militaristically, riding elephants into battle, redefining warfare, and expanding the empire until it encompassed all of present-day India and beyond.

On the other hand, they also advanced literature, culture, and the arts tremendously. They built the Taj Mahal, giant libraries, and had a tremendously multicultural empire. For more info on that, check out Akbar the Great, who — having brought together a huge number of disparate peoples in a surprisingly peaceful, literary, and secular empire, especially for the time — definitely earned the moniker.

Unfortunately, by the time this story begins, the Mughals were being ruled by Aurangzeb, who was neither peaceful nor understanding. He was particularly aggressive towards the Sikhs, partly because of religious reasons, partly because the Sikhs weren’t down with the caste system. In fact, the Sikhs were egalitarian in general, with women considered equals to men.

Which brings us to Mai Bhago. Sorry for the long intro, I just want you to know what she was up against.

Mai lived in a peaceful rural town with her parents. She spent a lot of time with her dad, who, in their daddy-daughter hangouts, taught her what any good father should: how to be a devoted Sikh, how to ride a horse, and how to kill anyone who starts shit with you. All of these came in handy just a few years later, when the leader of the Sikh, Guru Gobind Singh Ji, founded the Khalsa — the warrior-saints.

The following years were very difficult on the Sikhs, with the Mughals waging nonstop warfare on the Guru. As tough as it was on him, it was arguably tougher on his warriors, holed up in fortress after fortress, eventually subsisting on nothing but nuts and leaves. After months of this, with heavy hearts, forty of them forsook the religion and left the Khalsa, in order to return to their normal lives.

Mai Bhago was having none of that. Upon hearing about the forty deserters, she rode to every city around and got all of the women to refuse any hospitality to them. She even rounded up a group of women to take up arms in the deserters’ place — telling the forty to either stay behind and look after the children or sack up and fight. Suitably ashamed by this, the forty deserters had a change of heart and decided to rejoin the Guru’s cause.

Just in time, too, because as the forty (plus Mai) were riding back to the Guru, the Mughals were making another assault on his stronghold. The size of the army is difficult to determine from historical records, with the only source I can find claiming the Mughals had ten thousand men, which seems a bit ridiculous. In any event, it is agreed that the Sikhs were massively outnumbered.

On December 29, 1705, the forty-one Sikhs rushed in to cut off the Mughals anyway. They did several clever things in and leading up to the battle:

1) Positioned themselves in front of the Khirdana reservoir, the only source of water for miles around, and defended it viciously.

2) Laid sheets across bushes everywhere, giving the appearance of tents — and then hid in nearby bushes, ambushing the Mughals when they started attacking the empty “tents”.

3) Kicked up a colossal amount of dust, attracting the attention of the retreating Guru — who proceeded to unleash an incessant barrage of arrows from a nearby hill upon the Mughals.

Eventually the Mughals, battered and thirsty, withdrew. All forty of the deserters died in that battle, as did a large number of Mughal soldiers. Mai Bhago was the only Sikh survivor. From there, she became bodyguard to the Guru. She outlived him and later died of old age herself. The Mughal Empire under Aurangzeb’s leadership began a slow decline and died out a bit over a century later. The Sikh religion continues strong to this day. Mai Bhago’s spear and gun can still be found in Sikh museums, and her house has been converted into a Gurudwara (a Sikh place of worship).

She is depicted here not just wearing the traditional Khalsa clothing, but that of the Nihang, an elite warrior Khalsa sect. This outfit includes a variety of bladed weapons (the Guru was known to have five weapons on him at all times), electric blue robes, steel-wrapped turbans, and steel bangles about the wrist. I am unsure if she was technically Nihang, but for damn sure she had their spirit.
And yes, she is decapitating that guy. Follow the trail of dust to see the arc of her sword. She has her sword and shield on the same arm, up around her shoulder. Realistically, I should have put the shield on her other arm, but hindsight is 20/20.
Lastly: the Mughal being beheaded has period-accurate clothing, although his helmet is one of an infantryman and his outfit is that of a cavalryman. I wanted to be able to see his face.

Art and text courtesy of RejectedPrincesses.com